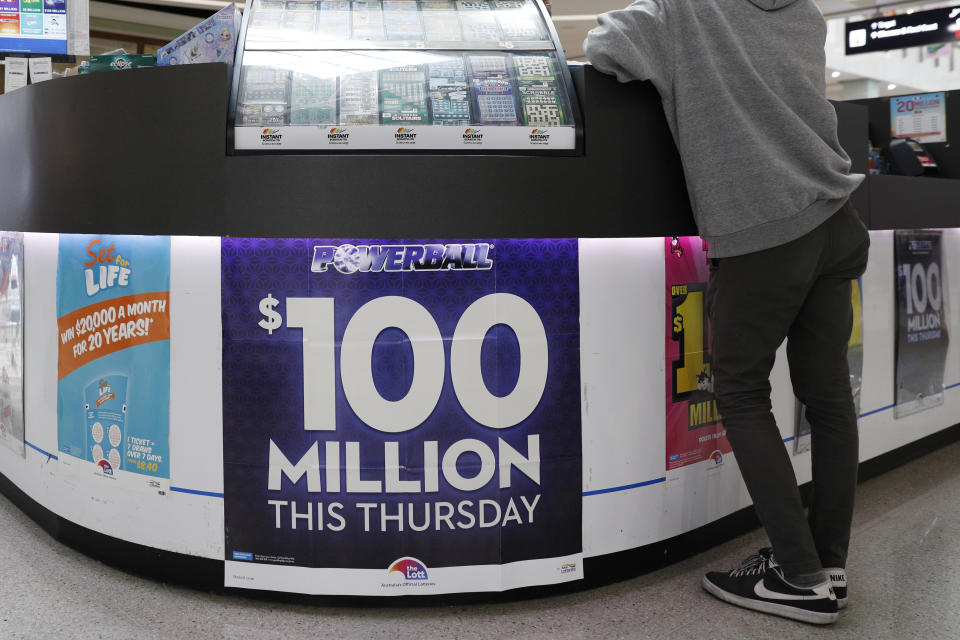 How to get an edge in $100 million Powerball draw

Powerball is boasting a $100 million jackpot for just the fourth time in its history this week – and if you plan on buying a ticket, there are some simple strategies to maximise your chance of taking home an extra large windfall.

With such a big prize on offer, plenty of Aussies will no doubt try their luck at winning some life-changing money.

But while players can’t do much about the vanishingly tiny odds they face, there is a way you can gain an edge when it comes to potential prize money.

Jason Murphy, an Australian economist and author of Incentivology, has trawled through the data to find ways to essentially hack the popular lottery.

The numbers that are drawn on the night are random, but the numbers people choose are not. To improve your expected value (prize money) in the unlikely event you win, it pays to choose unloved numbers.

“When you play Powerball, you need to channel your inner toddler: You do not want to share,” Mr Murphy told Yahoo News Australia.

“A big reason you can never get ahead playing Powerball is that it’s quite possible for someone else to have the same numbers as you, and if they do you’ll split that Division One prize.”

When it comes to Powerball, it’s really all about the Division One game. Seven balls are drawn from a set labelled 1 to 35, then the all important Powerball is drawn from a different set, numbered 1 to 20.

The bigger the jackpot is, the more competition (ticket sales) there are.

“Powerball can happily sell more tickets than there are different possible number combinations, and if multiple people have the winning numbers the huge, delicious Division One prize gets carved up into multiple chunks that are a far less tasty prospect,” Mr Murphy explained.

So when it comes to human nature, there are some reliable characteristics you can exploit.

The best number to choose in Powerball

According to Mr Murphy’s research, the least popular number to choose (and therefore the best one to select as the Powerball) is 1, while the most popular is 9.

He says the four most commonly chosen numbers are close to the middle of the range.

“It’s like people are using an understandable but silly heuristic – trying to minimise the size of their miss,” he wrote in a recent blog post about his research. If you guess 9 and the Powerball is 11, you feel like you were close.

Odd numbers are also more popular than even numbers.

“Small numbers are also out of favour relative to larger ones. The 10 most popular numbers sum to 125 while the least popular ten sum to 75,” he wrote.

“Do larger numbers seem more ‘random’ by virtue of being less familiar. And do we think more random-seeming numbers are more likely to be chosen by a random process? The human brain is a funny thing.”

Of course, none of this mitigates the minuscule odds of actually winning in the first place.

“You’re still going to lose, but there are ways to lose less,” Mr Murphy told Yahoo, even if it’s in the less lucrative Division 2 to Division 9 prizes.

“A simple trick is to choose numbers other people are less likely to choose. For example, instead of making your Powerball selection lucky number 7, you could try 16. In my analysis 16 is chosen less often and so if it comes up, you’re more likely to walk away without having to share your prize.”

“If you choose a pattern you’re more likely to share it,” he said.

“The chances of you sharing it will shift depending on whether you pick birthdays for example. People who pick numbers above 31 are probably less likely to share it.”

The $100 million Powerball draw 1379 will take place on Thursday October 20 at 7.30pm. The jackpot has reached this level after there were no division one winners during the past four draws.

Nearly half of Australian adults are expected to purchase a ticket, according to The Lott spokesperson James Eddy.

“If just one person scores the entire $100 million prize on Thursday night, they’ll also be crowned the second biggest Australian lottery winner in history,” he said.

Do you have a story tip? Email: [email protected].

Woman, toddler and baby hit by car driven by 95yo man while crossing road

Uber driver caught in the act by Sydney passenger: 'Been busy'

Warning for Aussie travellers over Christmas holidays: 'Lives at risk'