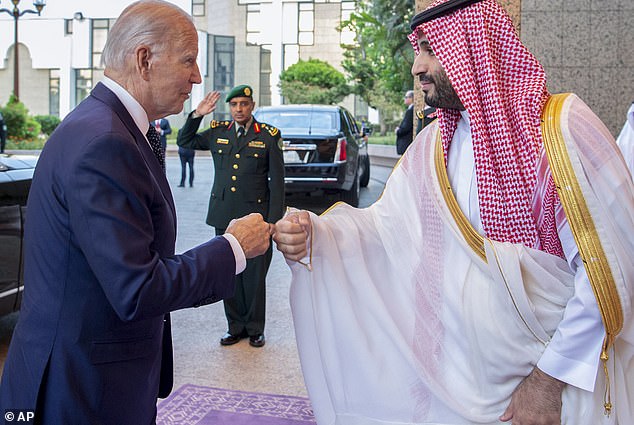 The White House said on Wednesday that ‘it’s clear’ the OPEC+ oil alliance ‘is aligning with Russia’ after it announced a massive production cut of two million barrels.

It stands to be a big boost for Moscow, despite the West’s efforts to choke off oil and gas revenues as a source of cashflow to fund Russia’s illegal invasion of Ukraine.

Meanwhile American drivers could face another increase in gas prices in what could end up being a massive setback for the Biden administration.

Energy ministers from the OPEC cartel, whose leading member is Saudi Arabia, and allied non-members including Russia met in person at the group’s Vienna headquarters for the first time since early 2020.

Their announced production cutback on Tuesday is the largest since the start of the COVID-19 pandemic. It comes after oil barrel prices dropped roughly a quarter in just three months, now around $90, amid fears of a looming global recession.

However, some parts of the US have seen prices jump back up again by up to 60 cents per gallon, according to the Washington Post, underscoring the already-precarious environment.

President Joe Biden was asked about OPEC+’s decision as he boarded Marine One ahead of a visit to hurricane-ravaged Florida but told reporters he ‘needs to see the details.’

He said he was ‘concerned’ and that it was an ‘unnecessary’ step, according to reports.

‘At a time when maintaining a global supply of energy is of paramount importance, this decision will have the most negative impact on lower- and middle-income countries that are already reeling from elevated energy prices,’ the statement read.

The White House is ‘having a spasm and panicking’ over OPEC’s expected decision to cut oil production, an unnamed official told CNN 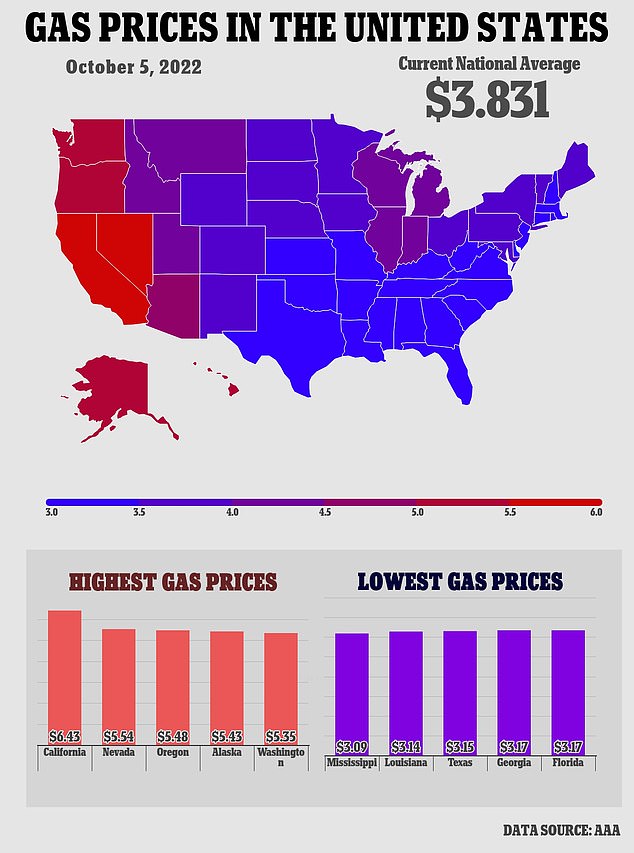 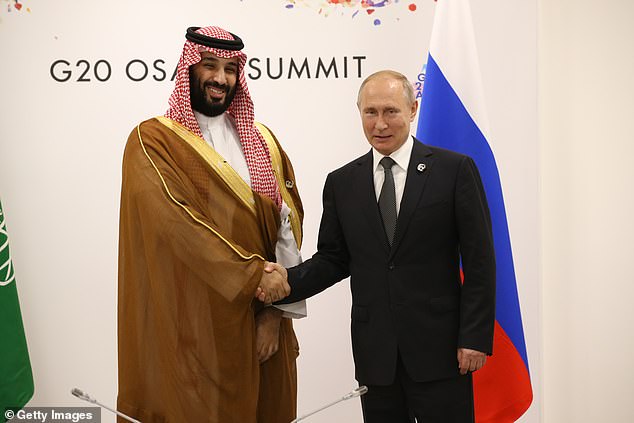 They also suggested that a new legislative effort could be on the table, adding: ‘In light of today’s action, the Biden Administration will also consult with Congress on additional tools and authorities to reduce OPEC’s control over energy prices.’

The announcement’s effect on the pumps is not yet certain, but the decision as left the Biden administration scrambling to avoid a ‘total disaster’ according to a CNN report.

MEMBERS OF OPEC: NATIONS WHO AGREED TO CUT PRODUCTION

During a press conference on Tuesday, OPEC+ was asked how much Biden’s release of the strategic petroleum reserves ‘distorted true price discovery.’

‘I wouldn’t call it a distortion. It was done at the right time. If it didn’t happen, I’m sure things might be different than they are today,’ they said.

OPEC’s decision after their Wednesday meeting could force prices at the pump back up after the White House celebrated them falling at a record pace this summer. They have already begun to inch back up in recent weeks.

But a sudden spike would be an especially concerning setback with the November midterm elections just over a month away.

One official told CNN that the White House is ‘having a spasm and panicking’ over the potential outcome.

High level officials across economic and foreign policy have reportedly been lobbying allies in the Middle East to vote against cutting production.

DailyMail.com has reached out to the White House National Security Council for comment.

‘[T]hey are adjusting back their numbers down a little bit here. OPEC plus has been saying and telling the word they’re producing 3.5 million more barrels than they actually are,’ Kirby said.

‘So, in some ways this announced decrease really just kind of gets them back into more aligned with actual production.’

He added that there were no ‘dramatic shifts in the price of oil,’ noting that Wednesday’s prices remain in the low 90s.

Press Secretary Karine Jean-Pierre was pressed on Tuesday about the White House’s earlier victory laps over falling gas prices, which has translated into comparative silence as they creep up again.

She answered, ‘So, it’s a lot more nuanced than that.’

Jean-Pierre pointed out that gas prices have risen across the globe and chalked the spikes up to ‘the [COVID-19] pandemic and Putin’s war’ in Ukraine.

‘We understand there is more work to do, we’ve never said we are done here,’ the Biden official said.

‘But we have seen, the reality is, we have seen the fastest decline in gasoline prices in over a decade. That’s because of what this president has done.’

A production cut could benefit Russia by establishing higher prices ahead of a European Union ban on most Russian oil imports, a sanction over the invasion of Ukraine that takes effect at the end of the year, analysts at Commerzbank say. 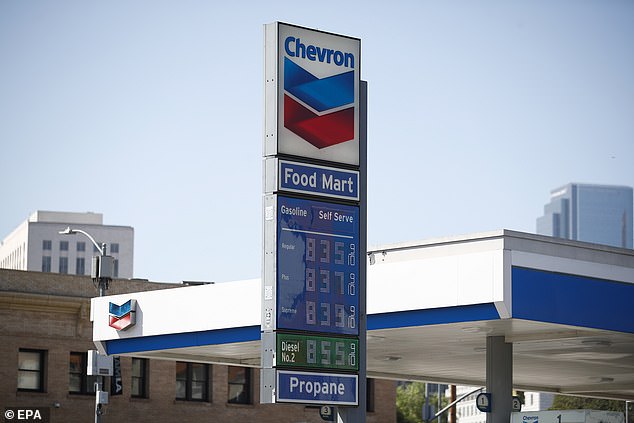 Oil prices surged this summer as markets worried about the loss of Russian supplies from sanctions over the war in Ukraine, but they slipped as fears about recessions in major economies and China’s COVID-19 restrictions weighed on demand for crude.

President Joe Biden flew to Jeddah earlier this year for a meeting with Saudi officials as oil prices were surging, but it appears that visit has done little to stop OPEC+’s production cut.

His meeting with Crown Prince Mohammed Bin Salman drew ire from Republicans back at home.

GOP lawmakers accused Biden of ‘begging’ for oil from a known human rights abuser while hammering him for not doing more to expand domestic production.

Kirby pushed back on Fox News Wednesday, asserting that Biden’s trip to Saudi Arabia was ‘not about oil.’

He did concede to calls mostly coming from the right that the US needs ‘to be less dependent on OPEC+ and foreign producers of resources like oil.’

‘That’s why the president did increase the draws from the Strategic Petroleum Reserve, to try to help stabilize this,’ Kirby said.

‘And it is also why the president has issued more leases now, thousands more leases, for drilling here in the continental United States, that oil producing companies haven’t taken advantage of fully.’

Republican lawmakers have nevertheless begun to hammer the Biden administration after OPEC+’s production cut was announced.

‘We need to unleash American energy production. It’s ridiculous that we are relying on foreign powers for oil when less than 2 years ago we were a net exporter of energy,’ GOP Rep. Billy Long wrote on Twitter.

Besides a token trim in oil production last month, the major cut is an abrupt turnaround from months of restoring deep cuts made during the depths of the pandemic and could help alliance member Russia weather a looming European ban on oil imports.

In a statement, OPEC+ said the decision was based on the ‘uncertainty that surrounds the global economic and oil market outlooks.’

The impact of the production cut on oil prices – and thus the price of gasoline made from crude – will be limited somewhat because OPEC+ members are already unable to meet the quotas set by the group.

The alliance also said it was renewing its cooperation between members of the OPEC cartel and non-members, the most significant of which is Russia. The deal was to expire at year’s end.